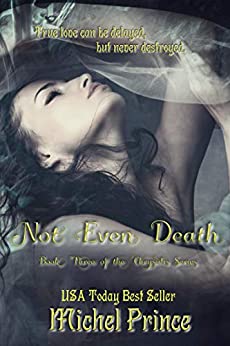 ​  The day of my wedding, I spent the whole afternoon getting ready in a salon chair. Oscar’s best friend Ariel was my maid of honor. I’d wanted Kelly, my best friend from high school, but she was gone. Kelly was an angel or a God, whichever way you wanted to look at it. She’d been my friend ever since my brother Caleb had been killed by a demon, but that seemed like a lifetime ago.
A few days before, I’d looked at the picture from Dad’s wedding of me and Oscar, along with her and Max, her love, also a God. Well, it was Oscar’s dad, but really he was mine now; had been for years. It was the last time the four of us had been together. Now the picture sat on our dresser, always watching over us.
“You miss talking to her?” Oscar asked.
On big occasions I tended to get very melancholy. I tried to stay happy on the surface, but he could always tell.
“I talk to her,” I replied. I could always pray to her and being a Goddess, she would be able to hear me eventually. “She just doesn’t talk back anymore. I’ll see her again. She promised me that.”
Of course not until I died. Kelly had promised to be the one to collect Oscar’s and my souls. I teased her and asked, “But what if I have to go the other way?”
Not possible and I’ll fight to the death to save you.
Another lesson I learned in high school was when a person dies a representative from Heaven and Hell would come to them and debate on which way they would go. For this reason, I at least knew I would see her when I died.
“Yeah, but not for a long time. You know how much I hate to share you. Give me at least until you’re ninety.”
“Only if you promise me the same.”
He placed his hand on the small of my back as I leaned my head on his chest. Not wanting to have him see me cry I turned around and nestled myself into his chest.
I was safe. More importantly, Oscar and I were safe and had been ever since we defeated Gaap in my backyard, finally separating him from my mother. So there was no need for my guardian angel Kelly to be around.
Now I had Ariel, a friend who’d been Oscar’s for years, but became mine when I went to college with her. There had been more than one time she slapped him around for me when he was being stupid.
“Look at you, lady.” Ariel’s voice seemed to always be full of joy.
Turning around in the chair, I surveyed the transformation. My hair was pulled up and wrapped tight in a bun. It actually made me look old enough to get married.
​Getting dressed was easy. My shantung dress had a simple design. It came down in a V on my chest and had two thin straps on my shoulders as the dress flowed down my body. Ariel had been shocked. She kept trying to get me to buy a more expensive dress, but they weren’t my style. This dress had no real train, but it did hit the floor, a must according to Ariel.
Ariel attached a veil to my bun as we left the car and entered the Como Conservatory. “I can’t believe it. You guys are finally going to do it!” she squealed as she cried for the millionth time that day.
I’d been engaged to Oscar since I was sixteen. At twenty-one I admit I was a young bride, but we’d put it off for a thousand different reasons and finally there was no stopping us. We didn’t need to get married to be together forever, we wanted to be. This non-dependence on each other was the final catalyst. It’s one thing to need someone; it’s another to want them.
“How are you not crying?” Ariel dabbed the corners of her eyes.
I wasn’t crying because I wasn’t making a mistake. That’s the only reason I could think of for people to cry at weddings. Why else would you cry?
Standing at the top of the sunken garden at Como Conservatory, I could see Oscar standing there surrounded by hundreds of flowers. With the glass ceiling and walls reflecting the twinkling lights, it was a magnificent sight.
Halo by Beyonce started to play. Through the glass door, I could see Oscar smile from the knowledge that the lyrics represented how I felt.
Oscar knew I wouldn’t walk down to a traditional wedding march. He knew music had always been a form of communication for me. When I feel too shy about something, I could always find a song to say how I felt. The song playing as I walked down the aisle might as well have been sung directly to Oscar.