Roadkill-Book One of the Steel MC Montana Charter 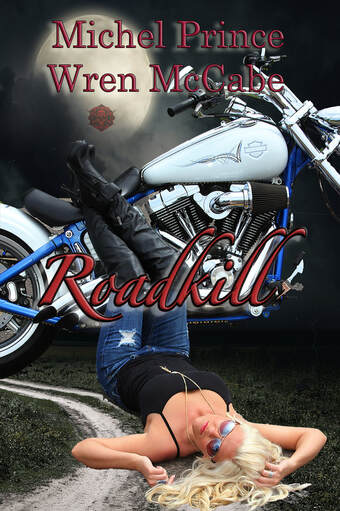 On a dirt road in Nevada, a woman lay dying.

In book one of Montana Steel MC: Josh ‘Red’ Luke, Montana Steel MC Nomad, wants to go home. It doesn’t have anything to do with running from something as much as the need to find his place in the world. As a former Army medic, he used his GI bill to become a skilled surgeon, which fills his necessity to help. Together with the training from the military to never leave a man behind, and his soul feels almost whole.

The woman struggles to find her own name and the reason for being brutally beaten and left for dead. However, the memories come in hard, harsh bursts and the struggles to figure who she was, leaves her reeling and landing in the violent MC world where her natural instinct to run come out. One consecration the lack of memory fortified her—was to discover a thing she never gave a chance in the past—love.

When those who caused the hurt find out their target is alive, but under the fog of amnesia, they set out to finish the job. With her life in danger, the safest place is in Red’s arms. He can heal the woman’s body, but can Red convince her there’s room in her heart for him?​ 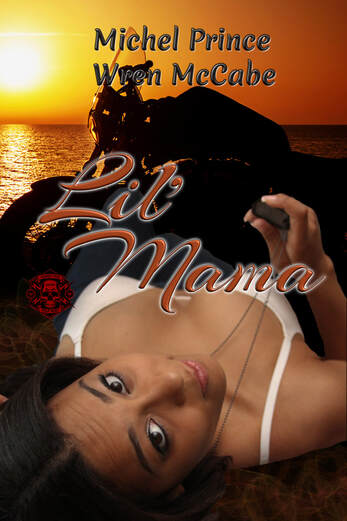 In book two of Steel MC Montana Chapter: Pete ‘Cass’ Coe, is a guy who doesn’t settle for just one woman, which earned him the road name 'Cass' short for Casanova. Newly patched into the Steel MC Montana Chapter, he's learning to fit in and become truly a part of the MC world.
Amelia Green, four months pregnant and fearful of her live-in boyfriend, Roger, ends up in the hospital with a broken leg. Additional complications have her in the ICU where fearing for her children's safety, she confides to a nurse about the violence Roger bestowed upon her.
After the Steel MC is contacted regarding Amelia, they head out for a long trip to bring Amelia back to the ranch to see to her healing. During the trip back to the ranch, Cass finds himself drawn to the injured woman. Nicknaming her 'Lil’ Mama,' he finds himself her primary protector. For Amelia, having a man who allows her to make mistakes and call her beautiful on her worst day, dares the soon to be mother the right to dream of a place for herself and children.
Cass knows the women they are set to save are damaged and need time to heal. Consequences be damned, though, he wants to fight for her.
What happens when Amelia, like all the other women, is required to leave and never return to the MC once they’re healed? Will Cass be able to let her go? 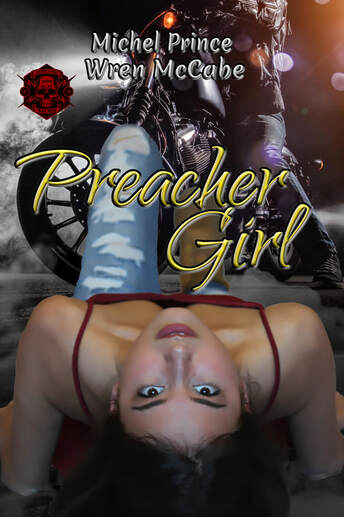 Formerly a Navy SEAL, Thomas Creek was used to being single and free. He earned the nickname “Hack” due to his mad computer skills when he joined the Steel MC Montana Charter. Being part of the club allows him the freedom to ride fast and free on his motorcycle, and he wouldn’t have it any other way. 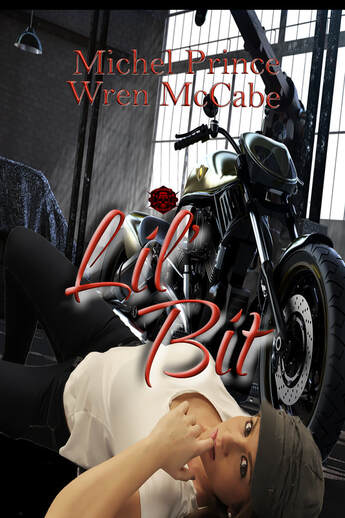 In book four of the Steel MC Montana Charter: Bryan “Baldy” Allen doesn’t have the same pedigree as the other founders of the Steel MC Montana Charter. He was named Vice President because of his friendship with Red, the Prez, leaving a part of him feeling as if he’s constantly playing catch-up with the former soldiers.
Weakened by cancer as a child, Baldy gutted out most of his life just to survive. Now thriving as the mechanic for, not only the Steels but those around Turnabout Creek, he finally sees a life ahead of him—there’s only one thing missing—his Lil’ Bit.
Kristy Coe survived a vicious attack that took more than her body—it stole any chance of a future with children. Like hearing the voices of her attackers when there is silence isn’t enough punishment.
Practically a shut-in until Baldy, a man who’d been there after the assault, offers her an opportunity of a job at the garage. Knowing Baldy would never allow anyone to hurt her, she’s able to run the gas pumps and check out customers daily with the security of him being less than a few steps away. Not to mention the yearning she has for the man she has watched from afar.
Scarred inside and out—feeling less than those around them—can Baldy and Lil’ Bit realize everything they’re missing is standing right before them? And will they have the time to figure it out since the Steel MC Montana Charter knows how to make enemies? Enemies that refuse to go away quietly. 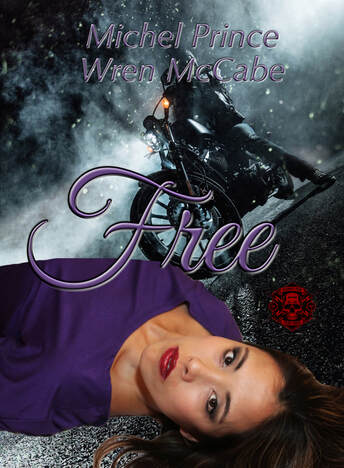 Duke Weston rode out of Turnabout Creek on a wave of cheers and well wishes as a hometown hero. Nicknamed Hollywood when he returned from LA to help his wayward nephew from being pulled into the Road Killers and the drug culture they’ve cultivated. The LAPD SWAT member joined up with the Steel MC Montana Charter only to discover he couldn’t commute and be part of the club. With life-altering decisions needing to be made, can Hollywood find his way home and help take down the Road Killers? Or will he be drawn back to the big city where there are no demands on him once he clocks out?

Fiona “Free” Anderson was rescued by the Steel MC’s Prez and VP. What everyone thought would be a few days layover, then a relocation, turned into more than a year. Dancing at the Roadside Bar, Free’s stayed on the edges of the club. Some believe it’s because of her past connection with the Road Killers and that she’s holding back secrets. Only Free knows why she fears to make a connection and never truly invests in anything past the next moment. Has she overstayed her welcome with the club? Or has she finally found a place to call home?

With Hollywood’s nephew a year from graduation, uprooting his life in LA needs to be about more than family obligations. A woman, beautiful, but damaged, might be exactly the hook to bring him back permanently. Only her past keeps resurfacing, and Hollywood wonders if it’s because she never let it go, or that things in her past refuse to take no for an answer?

Time, trust, and loyalty to the Steel MC maybe  Free and Hollywood’s only answer to a lifetime together. 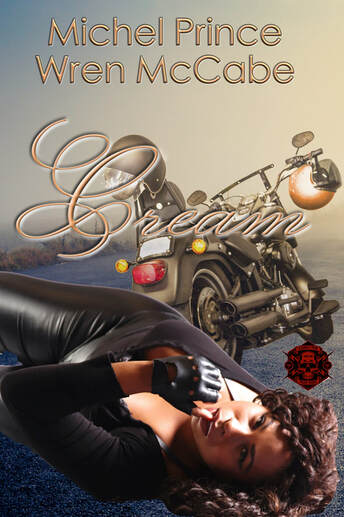 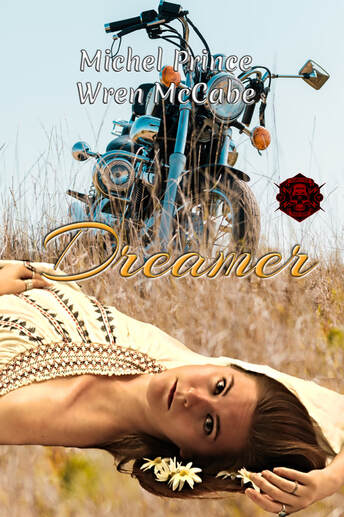 In Book Seven of the Steel MC Montana Charter-Meadow Lind knows how to make anything beautiful, with her lens, paint brush, pencil or in her own mind. Her current boyfriend is passionate, although others confuse it with abuse. She’s covers the bruises from those fits of passion until Dell from the Steel MC New Mexico Charter sees the truth and pulls her from an assault even Meadow couldn’t whitewash.

Christopher “Freaky” Anderson wasn’t sure what he was getting into when he joined the Steel MC’s Montana Charter. Newly founded, he worried he was on the same unstable ground he’d been when he joined the guard. Never truly finding the home, only years later a family was forming around him. When a new MC rolls into town wanting a parley there’s a chance for new line of income. One that won’t have him breaking his back, but half the club is vetoing the opportunity.

When a flighty Dreamer named Meadow comes to town Freaky’s push for more is flipped into overdrive. Hoping to claim the woman setting his world on tilt, yet somehow righting it in a way he never thought possible. The copper hair beauty gets distracted and lost in her own dreams, each time pulling Freaky into a place where he finds not only himself, but love deep enough to support a home.

​When Meadow’s ex shows up determined to be the last man she’ll ever love, until her very last breath will all Freaky’s dreams vanish in one final passionate battle? 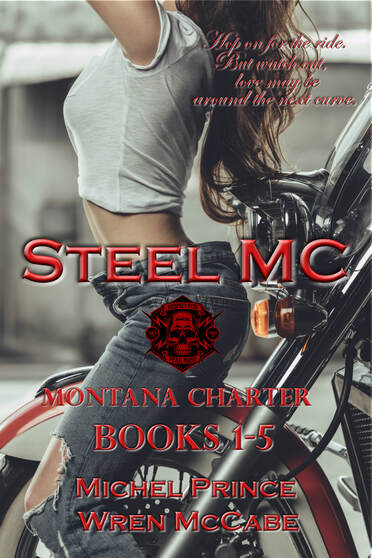 Hop on for the ride. But watch out, love may be around the next curve.
The Steel MC Montana Charter has captured fans since the first fateful night when Josh "Red" Luke found a woman dying on the side of the road in Roadkill. Since then the men of the Steel MC started a charter in Turnabout Creek, Montana and every is going along for the ride.
Books Lil' Mama, Preacher Girl, Lil' Bit and Free have followed, each with a rescue of a woman by a man of Steel only to learn they may be the one who really needed the saving.
When Red returned to his home town, he found it on the verge of extinction. With the help of friends ready to head out of town too, they revitalize the town and rescue victims of domestic violence. At times even finding the woman they were meant to have in their life. Join the ride of your life with the men of Steel.
***Possible Triggers for assault victims***